Basic Accord on Gamification of Japanese Anime for Overseas Markets and Joint Publishing- First step will be distribution of “Is it Wrong to Try to Pick Up Girls in a Dungeon? -- MEMORIA FREESE --” in early 2018 - 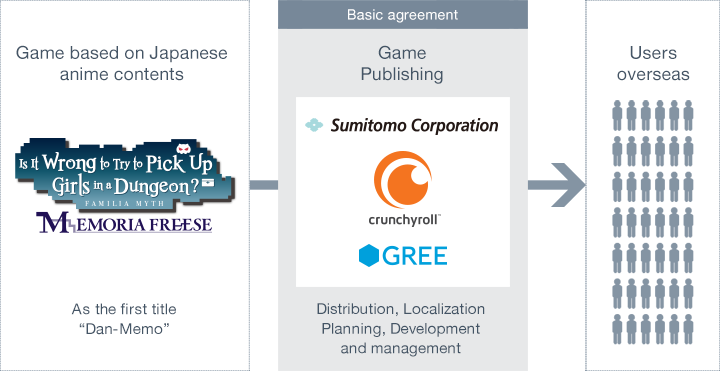 Sumitomo Corporation, in cooperation with Crunchyroll, is pursuing overseas sales of Japanese anime via Crunchyroll, a Japanese content distribution service offered by the company of the same name. The three companies involved in this accord will be utilizing GREE's planning and development capabilities to gamify Japanese anime for overseas markets and promote joint publishing and working to expand related businesses, with the Crunchyroll video distribution platform as a starting point.

The first project will be the smartphone game app “Is it Wrong to Try to Pick Up Girls in a Dungeon? MEMORIA FREESE” (hereinafter, “Dan-Memo”), scheduled for release in early 2018. Dan-Memo is the first full-fledged smartphone game app for the popular TV anime “Is it Wrong to Try to Pick Up Girls in a Dungeon?” (hereinafter, “Dan-Machi”). A GREE Group app development studio began distribution in Japan in June 2017, and three million downloads were reached in the first month. The app has proved extremely popular, topping the sales rankings at both Google Play™ and the iTunes App Store. Since first distributed on Crunchyroll in 2015, the anime version of Dan-Machi has become a very popular anime in North America and around the globe. In distributing Dan-Memo overseas, GREE is responsible for managing copyrights and planning/developing/operating games, while Crunchyroll and Sumitomo Corporation provide game distribution, promotion and localization support. Sumitomo Corporation in future will supplement its distribution of game apps developed and operated by GREE by distributing other apps overseas in cooperation with anime copyright holders and development companies delivering games in Japan.

Sumitomo, produces new Japanese animation through its CSA Fund jointly established with Crunchyroll in January 2016 and distributes on a global basis. Further, Sumitomo has established a strategic partnership in April 2017 with The Chernin Group, LLC, which has a stake in Crunchyroll through Otter Media (a joint venture with AT&T), to pursue new opportunities in media & entertainment as well as advanced technology fields. Crunchyroll is the world’s largest destination for anime and manga, boasting a global community of more than 20 million registered users and over 1 million subscribers. Crunchyroll distributes Japanese anime and manga(comics) available immediately after Japanese broadcast through game consoles and mobile devices, and Crunchyroll sells related merchandise through its online store.

Sumitomo Corporation, Crunchyroll and GREE are bringing to the table their differing resources and know-how to make available to overseas markets a variety of mobile/PC games based on Japan's treasure trove of anime content.

Is it Wrong to Try to Pick Up Girls in a Dungeon? MEMORIA FREESE 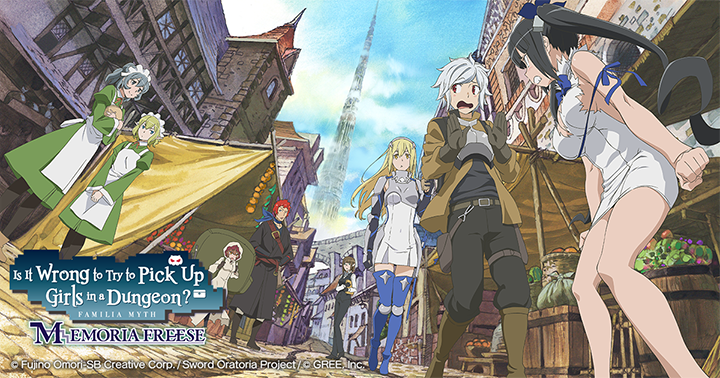 About “Is it Wrong to Try to Pick Up Girls in a Dungeon?”

More than eight million copies of the original book series have been published, and the TV anime broadcast in spring 2015 has made it a huge hit among anime fans as well as light novel fans.

The spin-off anime “Sword Oratoria “Is it Wrong to Try to Pick Up Girls in a Dungeon?” started in April 2017, and it has been well received by numerous fans.

GREE and the GREE logo are trademarks or registered trademarks of GREE, Inc. in Japan and/or other countries. All other trademarks are the property of their respective owners.